I made "grandma's pot roast" from page 63 of "falling off the bone" yesterday.
The kids like pot roast better if it's cooked in the oven. There's something about a roast in the crock pot that they don't like. And, sometimes, though, no matter how long I cook a pot roast in the oven, it will turn out tough. So, this morning, I turned to Jean Anderson and her technique, because I want this one to be fork tender and falling apart.
I had a question after reading step one of the recipe, which says to "braise for two hours". I don't know whether to put the cover on the Dutch oven or not. Took me a moment to figure that out. Page xi tells me that braising involves a covered pot.
I made an adaption (which I often do when I'm cooking or baking). I used leftover bre 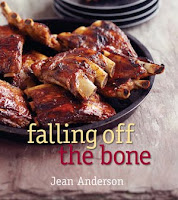 wed coffee in place of the water in the recipe. Many years ago, I took all my cookbooks with a pot roast recipe in them and laid them out on the floor of my great room where I could study them, and a good number of "southern" recipes called for brewed coffee. I've used coffee as a base for pot roast ever since. The first time that my mother saw me add coffee as I was starting a roast, she turned up her nose at it. I promised her she'd never know I used coffee when she tasted the finished product, if I could get her to try the finished roast. You'd think it would smell like coffee while it is baking, but it does not. And it doesn't taste like coffee when it's finished, either.

So, after braising it in coffee for a good chunk of time, two-hours at 325 degrees Fahrenheit; then adding veggies and letting it braise (covered) for two-and-a-half hours more, the pot roast is indeed fork tender and falling apart. Delicious! Here's a picture of it: 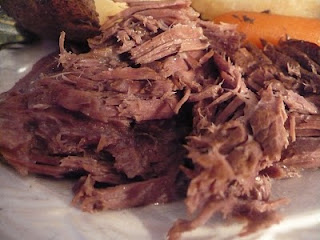