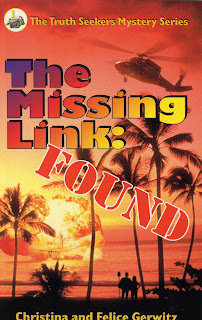 Felice Gerwitz's Media Angels sent us a copy of the first novel in The Truth Seekers Mystery Series, co-written by Felice and her daughter, Christina, who was just 12 years old when this book was penned. The book title is "The Missing Link: Found" and costs $8.99, and the book is described here.
>Felice explained to us that, "These books are meant to help your children to stand up for their faith, by supplying them with Christian role models that are also homeschool children."

This product is geared toward a more narrow audience than other products I've reviewed--this novel is written for older children and young teens. My 11-year-old dove into it with excitement! My 9-year-old son didn't care for it (I think he might like it in a couple of years), and my 9-year-old with some developmental delays and autism isn't ready for such wordy text, not even as a read-aloud.

I very much enjoyed reading about a family that talks about God, talks about the Bible, prays together, is God-centered in just about everything they do.

The story is not just entertaining, it is informative, too. There is an incredible amount of information regarding Carbon 14 dating woven into the mystery. I learned a lot.

I got a slow start into the book, as the first couple of chapters are, well, overflowing with descriptions of all kinds, so much that at first I thought the adjectives were used as foreshadowing, and later, I realized they were descriptions that painted an incredibly visual mental image for me to see what the author saw as I progressed through the story. For me, those descriptions were a bit distracting and overwhelming at first, and the vivid imagry through words calmed down for me as I got deeper into the story. The mystery kept me captivated, had me picking up the book whenever I had a few minutes, to see how the story would play out.

In the end, I liked the story, despite my rough start with it, and I would recommend it to parents of children in that middle school/early high school age range. I hope you like it, also!