Who knew that a $6.95 card game could be so addicting?

PyraMath™, from ISeeCards, is a card game that uses and reinforces basic mathematics facts. The 54-card deck holds numerals 0-9, which players use to create a mathematical pyramid in a sort of Solitaire fashion (if Solitaire were a pyramid). The PyraMath™ deck is not four of each numeral, like a "regular" deck of cards; there are more of some numerals than others. And each card features the numeral in "English, Spanish, Chinese, Roman, French and Arabic translations and symbols on the front".

Why would you want to buy the cards if you can play online for free? You can do a lot more with the deck of cards. The cards are excellent travelers; the cards fit into my purse or a backpack for waiting rooms or hotel rooms.

For the littles, you can use the deck to introduce numerals, placing numerals in numerical order. You can create a row of numerals where you leave one or two out and the child must place the missing numbers in the empty spaces. You can pull out the higher numbers and work on ONLY *adding* lower numbers. There are lots of ways to use the cards to create a simple game for younger learners.

For my homeschooler, who memorized her multiplication tables from Schoolhouse Rock and is still learning to add and subtract (we haven't gotten to division yet), and whose anxiety shoots sky high when we do anything that looks to her like academics, *I* held the cards, placed the cards, played the game and asked her the math facts that are within her developmental range. "3 and2 , 3 and 2, what could I play on 3 and 2? " And I'd ask aloud, "3 + 2 = ?" One day, soon, she'll join me at the table or on the floor when I play, but for now, she's on the periphery, watching, figuring it all out.

You can take turns creating puzzles for players to solve. Here's a puzzle created by the PyraMath™ folks that my eldest and I worked: 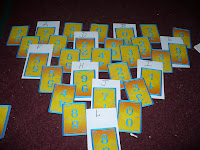 Thee's a two-player version of PyraMath™ that is somewhat similar to Double Solitaire. PyraMath™ cards can be used in a PyraMath™ version of "War" or Snap". There are lots of variations. Educators share PyraMath™ ideas here.

Creator Professor Eaglin's blog is here (not updated in a while); and the PyraMath™ facebook page is here, where fans can chat and where the company offers giveaways and contests with prizes and news of upcoming games.

I really enjoy PyraMath™. Late at night, I can get stuck on the online version for too long. It's a fun way to practice math facts that is waaaaaay outside drills and rote memorization.

If you'd like to see what others think about PyraMath™, go HERE.

I was given a complimentary PyraMath™ game through my participation in The Old Schoolhouse Homeschool Crew of reviewers. I am not otherwise compensated for reviews (I don't consider a free product a form of compensation when I must have the product in order to use it and review it) and am not obligated to provide a positive review.

If you have Pyramath-Addictive-Disorder, I'd highly recommend that you stay away from the online Fractasmic game. I tried it out for a while last night while I was finishing my review. Big mistake, but a lot of fun!