Here is a picture of 'our' kids in the tunnel at Lucas Oil Stadium in Indianapolis last weekend. As soon as the band on the field performs, our kids are on. This is our view from the tunnel: 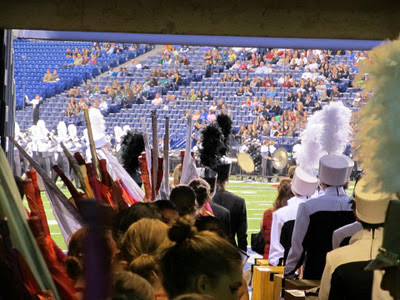 I watched three competitions as a spectator earlier in the season this year. This was my first as a chaperone. The experiences are very different. Spectators get to see a lot of marching bands. Chaperones are with the students 'backstage' and witness the preparation and warmups and an occasional last minute crisis or two. Watching the day unfold backstage was magical. We were on buses at 6:15 am headed to a freezing-cold outdoor warm-up at sunrise at a nearby high school; then to the stadium to dress and head to a physical warm-up space and then a musical warm-up space and finally to the field to perform. (Exactly 30-minutes prior to our performance, a sax neck cracked and sent the chaperones into a tizzy looking for the volunteer we knew could do something about it.)

Our band had the best performance of the entire season. The kids didn't even appear nervous as they headed out to perform.The experience was amazing and surreal - I think every kid should get an experience like that one. (Our scores - the most disappointing piece of the entire weekend. I shouldn't say this, but I'm going to. I'm disappointed with the judges. We were victims of the "Marian-Catholic effect" this year, in my opinion. Note: That is my opinion. I have no idea what our band staff think. We had higher scores at a BOA regional competition mid-season with a run with lots of musical and visual mistakes. Doesn't make sense to me and it stinks for the kids.) We finished in the top half of competing bands when I suspect we should have finished in or near the top third.

My opinion: The top 12 finalists from last year and repeat finalists should perform during prelims before a break to give the judges an opportunity to give the following band a fresh mind and fairer opportunity, to try to lower what blogger Paul Katula calls "scoring sequence bias." My opinion doesn't count for much. I'm disillusioned. I'd hoped for a better representation on the score sheets. (I know it sounds like sour grapes. But based on past BOA's, our scores could be nearly 20% lower than if we hadn't followed a repeat finalist.)

We stayed to watch finals - the top 12 marching bands in the nation (yes, one of the repeat finalists performed before we did in prelims) and the show was FANtastic! WOW! I am so glad I was able to be there!

Marching band season is over for the year. So is fall baseball. I'm not sure what we will do with all of our free time. (The girls are begging to get back on the ice to skate.)

You have some interesting thoughts! Perhaps we should contemplate about attempting this myself.

I could almost feel the excitement (reminiscing) looking at the photo. There is such hard work throughout the whole season and to not have the judges see your performances compared to your previous ones can be frustrating. How awesome to have made it to nationals!! Let your daughter know she'll have to make it back next year. :D If it's in Indy again, I'll plan better to be there, too.