In early March, my homeschooler and I attended a local presentation of The Miracle Worker. We went with a group of homeschoolers at a show for school children during the school day. Several public and private schools were represented, too. 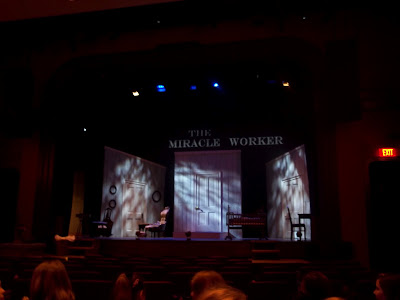 This was the first play my "'Rella" has seen that is "grown up", not produced specifically with children in mind. With lots of dialogue, a serious plot that requires a lot of attention, and a longer running time, I wasn't sure how my girl would do. The tickets were just $8 each (compared to $50 plus for the nighttime shows) and I figured we would just get up and leave if the play were too much for her.

We sat on the end of a row so that she could get up and move around if she needed to. I packed a bag with mints for oral motor and proprioceptive input.

We had to arrive really early and we were made to sit and wait for a lot longer than I would have liked. She handled it really well! I am proud of her!

I was so concerned about my girl.

I didn't have a concern in the world about me.

I was caught off guard by my own response to the play.

When the play opened with Matthew 18:12 projected upon the middle door, the wall I have built around my emotions developed some leaks, and the tears began to flow. I was surprised. My wall is pretty water-tight. The leaks always surprise me.

"If a man has a hundred sheep and one of them wanders away, what will he do? Won't he leave the ninety-nine others on the hills and go out to search for the one that is lost?"

Watching the actress portray Kate Keller was emotional for me, too. Kate Keller was an early Mother Warrior, fighting for her child who had been developing typically and then became deaf and blind after an illness. (sound familiar?)

There are so many parallels to Helen Keller's story and to our story.

"... to do nothing but obey is -- no gift, obedience without understanding is a -- blindness, too."
Annie Sullivan

Took me a while to understand that. We pushed for behavioral obedience without understanding for way too long.

When Helen's older brother, James, spoke to Annie about giving up on the idea of trying to teach Helen and simply accepting Helen as she is, teacher Anne Sullivan's response was also Mother Warrior in nature:

Giving up on 'our' kids is not an option.

I blinked back tears quite a few times during the play. I felt validated at the end. I grew a little in that theater that day. And my girl watched the play in its entirety and even made some comments about Helen and autism and herself when she was little in the car on the way to a restaurant after the play. WOW.

And aside:
As we exited the parking garage after the play,
here is what greeted us: 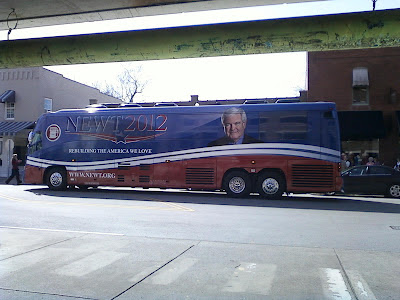 Annie and Kat have long inspired me. Some of the things that Annie has written about her ideas on education are so enlightened and are still ignored by the special education industry. When I was in elementary school, I went through a phase of reading books about people with special needs. I had no idea that, as a mother, I would be like the warrior mothers and wives in those books. Clearly, God had started to prepare me.