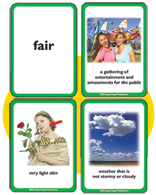 Super Duper sent me a game of vocabulary cards called Triple Talk to use and review. The game consists of 240 laminated playing cards in a cute tin mini-lunchbox type box.

I really appreciate the fact that the photo-definition cards say "Level 1" or "Level 2" or "Level 3" on them instead of grade levels. My teen who is academically delayed becomes upset when I introduce a game or book that is clearly labeled a grade level that is much younger than she is.

The cards are bright, the colors and photos are attractive, they are the size of a deck of playing cards and they are laminated to be sturdy. The photos are a big help to students who need that visual cue. The metal case makes them look more like a game or toy than anything "educational".

We haven't used that set of rules at our house. My child with autism needs a slower pace for additional processing time. And, like most homeschoolers, we modify everything we get. We use nothing exactly as it was intended to be used. Triple Talk is easy to modify for our needs. My child recently completed some achievement testing and she needs practice and experience in visualization. I've been pulling the photo-definition cards and we've been going over them to come up with one word that captures all three definitions. It's our own version of the "Learn the Definitions" variation from the rule book that comes with the game.

We are working on nouns, verbs, and adjectives at the moment, and one of the game versions is "Noun or Verb?" and another is "Nouns and Verbs in Context" (which includes adjectives, too).

My girl needs practice and experience defining terms and concepts, too, and I have struggled with how to model that. Defining a word without using the word is challenging. Now I have a game that models that for me.

Other games mentioned in the game booklet include, "Fill in the Blank!"; "Multiple Meanings Jeopardy"; "Pick a Card, Any Card"; and later, a way to use the words and definitions to learn figurative language, something we need practice with in autism.

Triple Talk is priced at $34.95 and can be used at many levels, which makes it a good value in my opinion. This is not a product that we'll use and finish quickly. We will pull this one from the shelf again and again.

Super Duper sent me a free game of Triple Talk Vocabulary Cards so that I could use and review it for you. I was not paid for this review. The opinions are my own. I am not obligated to provide a positive review.