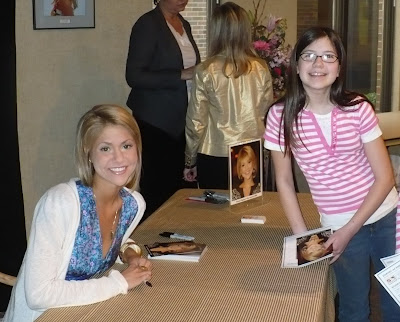 I got a reminder today that there are challenges in the world that are not related to autism.
When we returned to this state in the midwest from southern California almost thirteen years ago, we found a new church home. Little did we know that we were watching a future Miss America grow up. We don't really know her family well (we tend to know better the families who have children close in age to ours), but we watched Kirsten and her equally talented brother Lars, and their parents, lead us in worship at many services, either in choir, at the piano, with the guitar, in a solo, and I remember Kirsten, once, dancing. They're all amazingly talented and they all love the Lord!

She chose an intensely personal platform: eating disorders. I have a sweet friend who lost a daughter to an eating disorder in 2008. I know that they can be deadly. The subject is serious. It is real. It needs to be talked about.

Many of us followed her journey via regular e-mails from the Miss America organization, and many of us committed to pray her through her reign. She traveled 20,000 miles a month, and she worked hard! Her face and smile beamed today when she talked about being able to serve so many people during that year, meeting folks around the country, offering encouragement and reaching out, touching people in ways she'd have not been able to do had she not been Miss America.

Now, Kirsten has crowned a new Miss America, and she's resuming her life. She's getting prepared to use some of that scholarship money she won in the only three pageants she ever entered (obviously, she won every one of them), she's pursuing her dream near Hollywood, and she's kicked off the The Kirsten Haglund Foundation, with a message to young girls: "Love Your Body, Rock the World".

This weekend, Kirsten shared her journey with folks in our community, with two events open to the public and one, today, for our church family. She is real and authentic, and her message needs to be heard. Giving our girls the message that they don't have to be thin, or fit someone else's definition of "beauty" is an incredibly important one. And her journey to making that discovery for herself is one she's happy to share as she encourages young women though her story.

One fact that was brought up during the Q &A is the fact that Michigan is one of only EIGHT states that does NOT have mental health parity provisions that require insurance coverage services and treatments for individuals diagnosed with an eating disorder. (An aside: individuals diagnosed with autism are treated similarly) Haglund mentioned that a bill requiring mental health parity dropped this past week and she encouraged us to call our state legistlators to encourage them to support it.

She recommended a book that helped as she was developing a new self image: "Captivating, Unveiling the Mystery of a Woman's Soul" by John and Staci Eldridge.

The story of Kirsten's journey is fascinating, and her servant's heart is humbling. We'll be watching and anticipating more exciting events to unfold for her as she seeks God's will for her life and His direction for her next steps.