LESSON NUMBER FIVE
Episodic Memory and Resilience
and
Skating backwards, foundations of stopping, swizzles
"Our" last lesson, three days ago, was the first time my princess was frustrated on the ice. In "our" last lesson (lesson #4) the tasks became more physically challenging, and they weren't as much fun as previous tasks. The lessons focused on foundations of much bigger skills, foundations that need to be experienced and mastered to a certain extent before moving forward.

Combine those challenges with knowing where your body parts are without looking at them (for example, the tushie shaking that has to happen for moving backwards right now) and listening for the right kind of noise when you are scraping your blade across the ice, holding your balance, etc etc etc, when you REALLY just want to do it all NOW...

and you get a frustrated little girl.
These lessons are a journey for her. She's got some discoveries to make about herself and about skating.
She's doing quite well. Learning to recognize that in herself is a lesson she's beginning to learn. She protests, sometimes very loudly, before she realizes a) she's doing exactly what she was asked to do and b) it wasn't that difficult for her. But, her episodic memory, her personal meaning memory has lots of negatives for her to shut off in order to SEE the POSITIVES of NOW and apply that success toward resilience in the face of a new challenge and rewriting positive episodic memories over the negative ones.

I saw a glimpse of resilence today! :)

And, just in case you're wondering, YES, I took pictures and video today:
Waiting to go on the ice this afternoon.
She has pretty pink guards on her blades. :)
There were other skaters there to watch.
This rink is performing "Little Mermaid on Ice" in April.
Some of the performers were rehearsing. 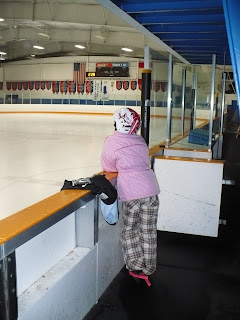 In the beginning, she was coached to "march"in order to move forward on the ice. Now, Coach says she is pushing on her own:

This particular part of the lesson is the part that left her frustrated and protesting, Tuesday. Look at her today:

Working on the foundations of stopping
while at the boards
the skates make a "SHHHH!" sound 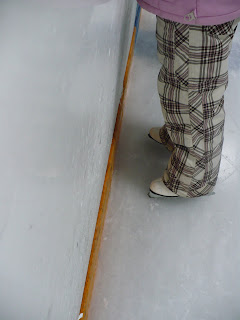 And there are TWO stars past the snowmen. My princess skated backwards all the way to the second star TWICE, and practiced swizzles (V's and A's) on the snowmen. 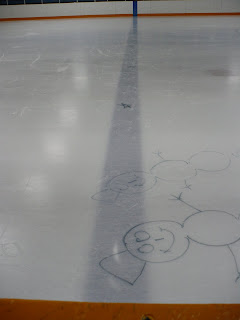 I thought of the perfect skate music for backwards . . . "The Twist" . . . I could hear it in my head while I was watching Alyssa!!!