The kids and I visited historic Fort Massac in southern Illinois. I figured we'd walk to it, take a snapshot or two, and leave, but this place is set up for kids (and grown ups) who like to explore. We spent a long time there on a hot August day. 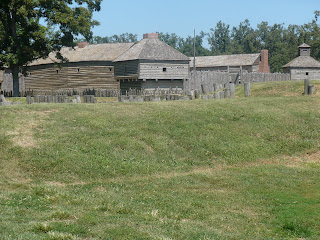 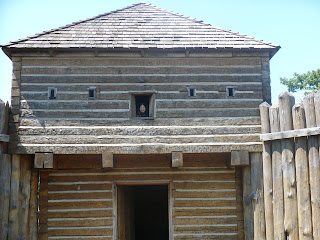 We had a scary an interesting moment inside one of the buildings. My girls scampered up a ladder to the second floor of one of the buildings before I could stop them, and my younger princess, the one diagnosed with autism just after her second birthday, could not get down the ladder.

She peered at me from the square opening in the ceiling of the first floor, trying to walk down that ladder facing forwards, as if she were descending a flight of stairs. She was terrified to turn around and come down facing the ladder.

At one point, she asked me if she could jump. *GASP*

I understood her fear. She uses her VISION to tell her where she is in space. In order to descend a ladder, you need to know where your feet and legs are in space, and be able to lower yourself, in part, at least, without looking at your feet or looking at where you're headed.

She is using her proprioception a lot more since she began figure skating, but I suspect that she doesn't realize it.

We coaxed her into turning toward the ladder and I held her foot in order to guide it to the first rung. Once she started down, she didn't need me any more. (!!!)

I handed the camera to my daughter so she could snap a few pictures while I stayed in the position of spotter as she lowered herself.

She made a discovery: "I'M DOING IT! I'M DOING IT!" she exclaimed as she made her way down. 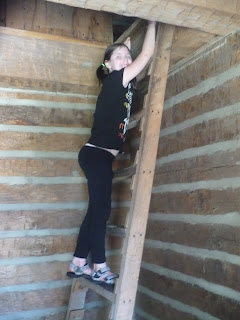 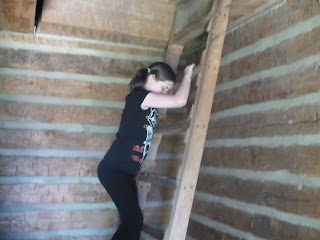 Good for her! It's great when any child realizes that they "can do it!" That is so neat that the fort was set up for exploring too. :-)

I love old forts. We visited Fort Harrod in Kentucky when we moved to Carolina!