Yes, there is a REAL Metropolis, home of Superman! (The kids and I are on a long distance field trip -- can you tell? *grin*)

The Superman statue gave us a free show -- seems an officer from the sheriff's department was returning four yellow-clad prisoners to jail as we were at the courthouse for our photo-op with the big guy. 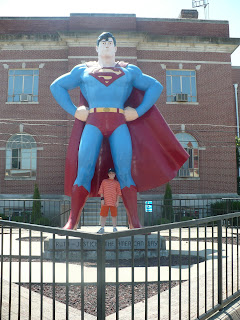 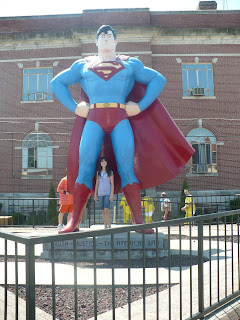 My TOS tote bag, Toteianna, really wanted her picture made w/ the Superwoman cutout. I need to learn to squat so that my head rests on the neck of the cutout! lol 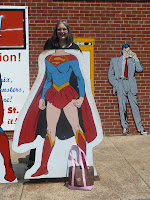 The younger princess could not stand behind the cutouts for a photo op because the sun was too bright there, and because the sun was too bright there, she refused stand with the statue across the street for a photo, too. Late last night, when we were looking at the photos I uploaded to the computer, she told me the sun hurt her eyes as we were taking those pictures.
***
Metropolis is home to more than one super statue:
Big John stands in front of his supermarket 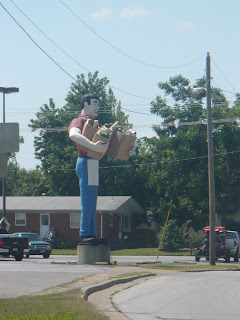 that is cool! Totiannna looks lovely, and so do you as Superwoman.

Have a good one.

Totieanna looks like she is having as much fun as you are! Aren't you really Superwoman anyway? :)

I think it is cool that the young princess was able to explain it to you later . . . hat, sunshades anyone? :-)