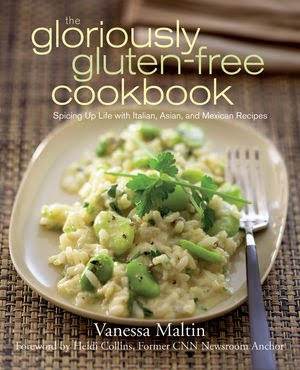 I received a copy of Vanessa Maltin's new cookbook last night. It's titled, the gloriously gluten-free cookbook, Spicing Up Life with Italian, Asian, and Mexican Recipes.

I sat down after supper and read the forward by Heidi Collins, read Maltin's intro, and read every recipe with my "we're-more-than-gluten-free-and-can-I-actually-use-this-cookbook???" perspective.

For those of you who are simply GLUTEN-FREE, I think you'll adore this cookbook. For those of you who are MORE than gluten free, I think you'll find (like I did) recipes you can use AS IS and some you can use with a substitution here or there. There are a number of recipes that have enough casein-based ingredients that I will not be able to make them at all for my daughter, (I don't have a good GFCFSF substitute for Parmesan cheese, for example) but will be able to make them for myself and friends with a wheat intolerance or Celiac.

I cook around so many allergies that I don't expect a cookbook to cover all of them. Gluten-free recipes are easier to adapt, because the gluten-free part of the recipe has already been adapted for me, allowing me to concentrate on substitutions for other ingredients on our lists at home. This cookbook is a good starting point for me.

I'm not a fan of Mexican food. I didn't grow up tasting those spices and I've never grown a taste for them. As an adult, I learned that I like Italian and Asian food, and gave up making those recipes when my daughter was diagnosed with a number of food allergies that include wheat/gluten, milk/casein, and soy.

I am delighted to see several recipes in the Asian section that do not use soy sauce!!! There are a few Asian recipes that use just a small amount of soy sauce - I may be able to recreate them with a mock soy sauce now that I have a solid "base" recipe.

My daughter (the one w/ the allergies) peeped over my shoulder a couple of times as I was reading recipes and said she would try this one or that one if I'd make it. Now that I've discovered a soy-free, nut-free mozzarella cheese substitute, I want to try some of the Italian recipes in the gloriously gluten-free cookbook. Who knows, maybe I'll even try a Mexican recipe, too.

The cover photo is the only photo of a completed recipe in the book. (I like photos in cookbooks, and I'm guessing omitting photos allowed the publishers to include more great recipes while keeping the price down.)

Disclosure: Wiley Publishing sent me a review copy of the gloriously gluten-free cookbook. I am not financially compensated for reviews and am not obligated to provide a positive review.
Posted by Penny at 9:39 AM