Together Again (and signs of progress)

We picked up eldest from camp yesterday, and I love how the sibs interacted after being apart for a week-and-a-half. (So, I can't take a clear photo while walking. Oh well. I still love this photo:) 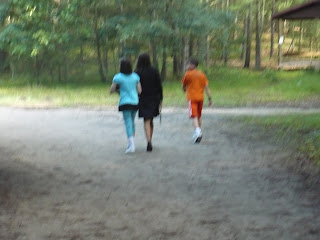 I was completely dreading a bit anxious about the final concert. Last year, the skating princess was unable to sit through the concert, and her behavior had people staring and me chasing her during the concert. 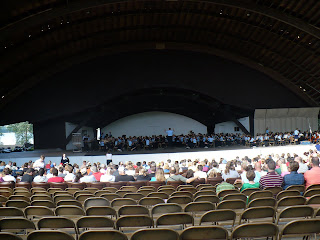 This year, I chose seats halfway up, in the front row of the section with benches, giving her room to move around. I had hard candy for oral motor proprioception. Her dad walked with her until the concert began, getting wiggles out. And we all crossed our fingers when the concert began.

The unknown length of the concert creates anxiety for my girl. The program looked long. Would she be able to control her screeching and defiance and sit respectfully through the concert, even when she didn't want to be there? How would the memory of how she (didn't) cope last year affect her this year?

There are so many things, developmentally speaking, to have to come together for an event like this, for a child on the autism spectrum. Until I had a child on the autism spectrum, I had no idea. Just the level of joint attention is huge, knowing that Mom and Dad want to watch the concert, that others around us want you to be quiet is big. Co-ordinating and co-regulating yourself with the strangers around you, avoiding bumping into someone next to you, is a challenge. Following the program is yet another skill which includes figuring out which symbol means the band is about to play and which symbol means the orchestra is about to play. Having the desire to run away and scream and screech in protest out of anxiety and fear of the unknown and a memory from last year must have been gi-normous. Having the self-control to suppress the desire to run and scream is even bigger than gi-normous, especially when there was an absolutely gorgeous lake behind the band shell, visible from where we were sitting. (Can you see the lake? The photo is deceiving, I think. The lake is much closer than it appears, below.) 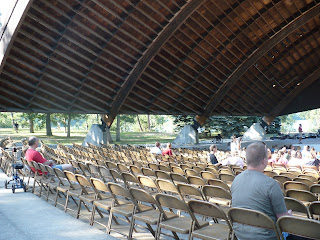 Amazingly, she held her own. She sat with us the entire time and asked several times if the concert was about to be over, and she asked to go to a restaurant to get something to eat, but for the most part, kept her voice low and, for her, calm (which I would translate to mean only slightly screechy).
That, my friends, is a SUCCESS! Maybe some of our practice in collaboration is paying off.

After the concert, SISTERS: 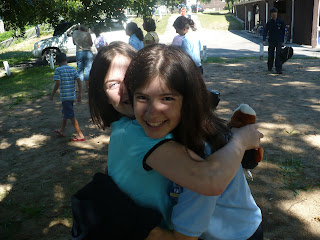