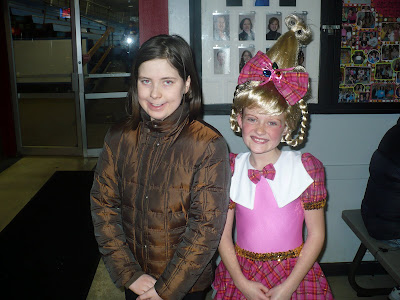 Soooooooo, the arena where my skating princess takes lessons is presenting a "Grinch" on ice, and two people told me that there is a 7 pm performance TONIGHT.

On the way to the arena, my skating princess told me that her favorite character is Cindy Lou Who.

We were slowed by the scene of a horrible accident, and spent a few minutes beside the accident scene watching a wrecker hook up a vehicle with the front-end smashed in (the kind of damage that makes you gasp when you see it) and an ambulance preparing transport someone to the hospital.

My princess asked, "Are they okay?" I told her I didn't know, and I began to pray aloud for them, asking God to be with the helpers to help the patient in the ambulance, and I heard a little voice from the back seat affirm with a "Yes!". And I asked for safety for the ambulance drivers, and I heard that little girl affirm with another "Yes!" I thanked God that we were well behind the accident, and I heard another "Yes!" from behind me. As I wrapped up my prayer, I heard her say, "And, Merry Christmas, Jesus!" :) *sniff*

My princess and I arrived at 6:50 pm to find everyone LEAVING, including the cast.

The show tonight was at 5 pm, not 7. The information I got was wrong.

I had no idea what to expect. Individuals with autism are not known for resilience, especially when we're talking about a change in plans. We thought we were going to see a show and POOF, that opportunity evaporated, as we realized we'd missed the performance.

My little girl understood. She was sad, disappointed, but she realized my mistake, and accepted the news that we'd missed the show and would have to return tomorrow. There are day shows for school kids tomorrow and we'll probably attend one of those shows with field trip kids.

AMAZING!
We happened to see Cindy Lou Who (gushing - isn't she ADORABLE??!!) as we were leaving, and asked for a photo, and for permission to share it on a blog, and her parents graciously said "yes". To Mr and Mrs Who and Cindy Lou Who, I thank you. You helped us salvage a disappointment at the arena.

Oh, Penny, that IS wonderful:)Kids are amazing.

That is wonderful! I held my breath when I read the part about the show being missed. I just had an almost identical experience with my daughter - who didn't respond with such grace :~)

RDI(r) has helped us SO MUCH and in so many ways.

I forgot to write about how we were the ONLY two people trying to go IN at 6:50 pm last night, with several *hundred* people pressing their way OUT, and my girl STAYED WITH ME. I didn't have to watch behind me or hang on to her. She was responsible for herself in that situation. I'm more amazed every time I think about it.

Way to stay calm and neutral in the face of major stress. I love how the princess followed your lead. What a beautiful story to read this time of the year!

Wonderful!!! So thankful that God placed Cindy Lou in the right place! What a reward for your daughter! Great job on both your parts!!!!