We had an "adopted" family member along for the skating lesson today, one of our long-term CLS/respite workers is back after taking a college semester off. She had not seen the princess skate since late August/early September. She was amazed at the progress she saw today.

My skating princess's coach has added some uncertainty to figure skating lessons. Coach is coaching in street shoes from the sidelines because of an injury to her ankle, and she's not able to use guided demonstration as she has in the past.

One of the early terms I heard as I was learning about RDI(r) (Relationship Development Intervention) is "productive uncertainty". Learning and growth depend on tension and uncertainty. Life without a certain amount of tension and uncertainty is boring. Dr. Gutstein explains that individuals with autism don't manage uncertainty with competence, and we see rituals and repetitive behaviors, rigiditity, strict rule-following as an attempt to keep everything the same while avoiding change and uncertainty.

RDI(r) helps parents us themselves in new ways to offer tiny challenges and little bits of uncertainty, small changes, "just noticeable differences" to their children w/ asd. Flexibility grows from these experiences.

When Coach told me she'd have to guide my skating princess from the sidelines in street shoes for a couple of weeks, both of us wondered how the princess would handle it. Had we allowed the princess to become dependent on Coach for demonstration? We could either try it in order to observe the reaction or wait a couple of weeks until Coach could return to the ice in skates.

Coach said that sometimes a student relies too much on the Coach for that demonstration, and having the Coach on the sidelines puts the student in more of a thinking position. But she's not referring to students on the autism spectrum.

Would this be productive uncertainty? Or UNproductive?

I am pleased to see that my skating princess understands every term. She knows the difference between a pump and a stroke and a swizzle. That helps. Coach taught her the proper terms from the beginning.

The princess has been working on crossovers.
I somehow managed to get still shot of one: 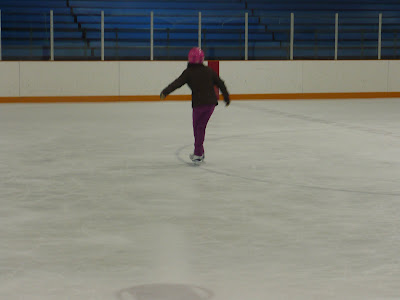 I see some resilience growing. She does not like backwards *anything*:

Watching her makes me want to learn to skate!

Pamela was watching the skating princess with me and said she was great! :-)

Very exciting to watch her grow and handle uncertainty beautifully!