I always find fun concepts in the book section of the warehouse club. Last week, I found something new to me: Scratch & Solve Puzzles. Priced at $4.99, I bought two versions of Hangman and a Yahtzee Scratch & Play book.


The publisher is Puzzle Wright Press at http://www.puzzlewright.com/. Type "Scratch & Solve" in the search box.


I pulled them out for the girls tonight as we tried to watch my son's baseball game from a very poor position in the parking lot. My younger daughter wanted to head straight for the playscape at the ball park, but I wasn't comfortable with her doing that. The playscape was too crowded tonight. Too many kids. Not enough parents watching them. And I knew my younger daughter would make a scene if we got out and tried to watch the game. So, we stayed put. And I waited for her to calm and quit asking to go to the playscape. I wanted to leave while she was calm --and she needed time to do that-- and without going to the playscape. 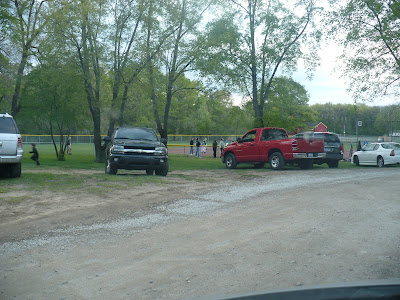 I could see little more than third base. That's my husband coaching third base with my son on third. We had absolultely lovely seats. (That's sarcasm, in case you can't tell.)

My homeschooler calmed herself. (WOW) She watched her big sister play one round of Scratch & Solve Hangman and picked up her own book and began to play her own game. The two of them figured out quite a few puzzles, too! At one point, she commented to her sister that the puzzle books were more fun than the playground. (I'm not sure I believed her, but she did say it.)

Thank goodness for a zoom on the camera. 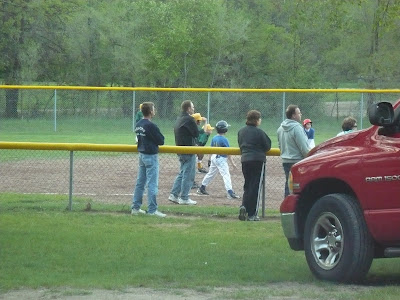