Last week was phenomenal. I knew the week was extraordinary. I knew that I should not expect that same level of phenomenal-ness every week. (That's a sign of growth for me.)

This week was more challenging in terms of behavior and focus. Little Bit had more stomach issues (on Wednesday, she ate almost nothing). Her eczema is flaring again; that is miserable for her. I know it's miserable, because I had eczema like that in exactly the same places on my legs when I was her age. (I'm waiting for some lab results that may help us figure out the eczema; our MD was out out town at a conference all week. I hope to get the results early next week.)

Hubby was out of the country on a business trip for almost six days. That throws the whole family off a little.

We developed my girl's new PCP (person centered plan) with our case manager this week. That took a chunk of one morning.

The rec therapist was a no-show again this week. Two weeks ago, she called in, sick. I hope she's okay. Our case manager is looking into it for me.

My girl lost a tooth. The loose tooth was bothersome and dysregulating.

We're doing some exercises for reflex integration (RMT, or Rhythmic Movement Training). Our "autism" consultant gave me this article, which I located online in case you'd like to read it, too.

We didn't get as much done this week according to what I have in my mind as "good enough". Pushing her when she's sick does nothing but make her resist and screech in protest. She learns nothing except that she doesn't like her mom in those moments. What's a mom to do? Accomplishing schoolwork, what you and I think of as "academics" takes a back seat when illness and eczema happen. What do you do at your house when your children are grumpy and dysregulated because of illness? Simply joining me is a challenge for her when she's under the weather. (What would happen if she were in a school-building school and acted out because something hurt? That was an issue before we became homeschoolers. They treated her as if she were a bunch of behaviors, not as if she is a child who must learn to self-regulate during a cold or illness. And what happens when a child misses a lot of school due to illness? When I withdrew her from school, she had missed a lot. I still believe there is a viral component that has played a role in our "autism" over the years).

Note to self: Put together a folder or small box of "work" that we can do on days where one of us is not feeling well.

I spent a lot of time this week slowing down, waiting, giving my girl time to process, to self-regulate in moments of discomfort. Everything took two or three times as long as it did last week. I am beginning to see my girl deal with her own anxiety and discomfort (both physical and mental) with less help from me. This week, she got more practice at that. I am continuing to learn to let go of pushing "academics" during times like this and letting other lessons rise in priority. Self-regulation is extremely important.

She still wants a new Wii game; it's the one I mentioned last week. I told her she'd have to work to earn money for it. For the first time, she is actively looking for chores to do and ways to help out and when she does something, she comes to tell me what she's done. For example, after my big shopping trips on Saturday, I left some items on the bottom stairs for someone to take up the next time someone went upstairs. They were bathroom items. She took them all up for me and came to tell me. She's never done that before. She helped me with laundry. She picked up after herself without being asked.

Over the weekend, she became a bit obsessive about this Wii game that she wants. (Obsessive and repetitiveness are signs of possible illness. The "autism" is much more prominent with illness.) I determined that if she helped me every day with chores, we'd go buy the game Friday (which is today). She kept reminding me the number of days between now and Friday, which becomes annoying. And then, she began asking, over and over, how many days until Friday, a question that she knew the answer to. She was on my last nerve. I chose to ignore her. She continued to ask. I thought I would scream. But I didn't. I kept quiet. And then, all of a sudden, she came up with her own solution. (This is HUGE.) She brought me a piece of paper with her handwriting on it - she showed me (that's HUGE, too) her "waiting chart" or "waiting calendar" (I forget exactly what she calls it) - it was a visual chart to count down the days until she had earned enough money for that Wii game.

She cleaned her room by herself, appropriately, and kept it clean all week. That's a first.

After art therapy, we drove to the arena for a private skating lesson, where the very child who was quite happy at art therapy became upset about skating. She *loves* skating. Not this week. She stood in the parking lot and refused to go inside. She crossed her arms and told me she'd just stand right there and get run over. I waited her out with a lot of silence and few words, allowing her time to regulate. Her eczema was bothering her and I'd forgotten to bring her ointment along, and skating would pull and stretch skin that hurt because of the rash. She did go inside, she protested the entire time I laced her skates, and then she went on the ice and began to smile. I wish I could find for me the thing that skating does for her. 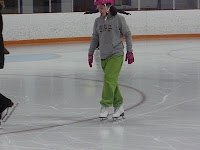 She had music therapy - she was very dysregulated (illness???) and gave Miss Julie a difficult time, except for the part where she got to write a song. Little Bit even came up with a melody to go with the words.

She had jump rope and karate. Karate was more challenging this week for many reasons. The room was hot; a door was propped open to allow cooler air inside, and the children playing outside by the door were distracting. Additionally, the sensei taught the class corner turns, which meant some complicated motor planning combined with the fact that she had to turn away from him and not look at him. She'd shift out of position to try to see him and then try to get back into position with her back to him, and then she couldn't see him again... *sigh* Yet, she stayed engaged for an hour. I saw her begin to wilt and then push through her tiredness (I'm talking attention here) and stick with it until the class was dismissed. 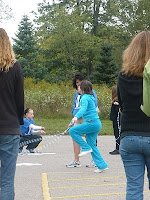 We added one new vocabulary word from Vocabulary Cartoons and reviewed the words we've learned in the past. She continues to ask what words mean.

She learned seven new letters in "Read, Write, and Type". This is a really neat program. 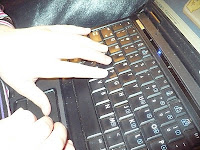 Yes, we did buy that Wii game.

I'm thinking about and looking for items for our box of things to do when we're not having a great day. Write Shop Story Builders are definitely on my list. I'm looking for Artistic Pursuits and Spears Art Studio. I need to print a few activities from Spears Art Studio and from abcteach.

Our school day isn't over yet. She and I did a little shopping this morning (lots of opportunities there); I'm letting her chill with her Wii game for a little while. We have laundry to do; cornbread sticks to make; a new-to-us magazine to read together. And her Daddy comes home tonight! Woo hoo!

Next week, we add to our schedule a dance class for individuals with special needs. I believe more movement activities are better than fewer. Did you read this article? Or this book?

And I want to look at "The New Drawing on the Right Side of the Brain". A homeschool mom at jump rope was reading it and I am intrigued. Could this course in a kind of perspective taking address some of the issues in autism? (I just found the web site of the author.)

How was your week? Share your ideas with me.

Glad you had such an exceptional week, Penny! I had a great week with my ASD son too. I realized that he's now answering many questions. Previously I had no way to gauge what he was learning because he couldn't give info back to me (even when he showed later in different ways that he had taken it in). Suddenly he can answer questions about what he's learned. Now that he understands how to relay information, he's excited to do so. In fact, I need to work with him on taking turns because now if he knows an answer to a question and I call on a sibling before him he gets upset.

He also learned how to shake hands this week. His therapist had suggested role playing these sorts of things and it worked! I wish I had realized earlier that I simply needed to break down each step for him and practice at home. I can't wait to see our pastor's reaction when he puts out his hand this week and Caleb reciprocates instead of ignoring him!

On "sick" days, I would read aloud for hours, while the kids played with Lego, magnetic toys, drew, etc. Or we would watch lots of videos. Or go to the conservatory (like an indoor park with flowers) and wander and spend forever laying by the side of the koi pond, dangling hands into the water. Normally, both kids were good at "self-entertainment", but not when sick. There are so many ways and things to learn. Videos all day, every day can be a bad thing. But videos all day on a sick day can be a great learning event, too. Whether it's science videos or fiction (movies), they are still learning.