When she was little, we went to the zoo, and she didn't see a single animal. She saw the pebbles and rocks on the ground, instead. She was not able to follow my gaze and look at what I saw. Early levels of joint attention were gone when she regressed.

Her lack of joint attention required that I hold on to tightly her by the wrist, so she wouldn't bolt away from me.

She didn't know how to follow the teacher in kindergarten, first, and second grade (before I withdrew her from school). She could not follow her classmates. She couldn't follow long directions. She didn't understand the "why bother" of it all.

We held on to her, we directed and prompted her around to compensate for what she was unable to do for herself.

She couldn't coordinate her actions with the actions of her peers and teacher. She couldn't shift attention among several areas of focus, both verbal and non-verbal. She was placed in an autism room until I said, "no more".

This week, she took her first ever martial arts class, with neurotypical peers, in a homeschool co-op setting. Without an aide. With no more support than other children in the same class.

Earlier in the day, she talked about karate, emphasizing it with a "Hah-YAH" kind of sound effect and a karate chop motion. I told her that karate class may not be like that. Would she enter the class and want to do little but her own karate chops? Or would she realize that what was in the sensei's mind was different from what was in hers, and would she join him?

I told her that the class would be "serious". She asked me what that meant, "difficult?" she wanted to know. I tried to explain that it would mean being quiet, not talking to other students, following directions, trying hard.

She coordinated herself between two students and among the entire class. A child who long ago didn't know where to look was able to focus attention where it should have been focused. She watched thoughtfully and tried to imitate her sensei.

The child who would screech and scream in protest when asked to do something a second or third time because, "I already did that!" performed multiple attempts at a move today, sometimes 30 or more attempts with no screeching.

The child who is known for asking too many times, "Can I be done now?" didn't ask it once. She not only focused, but she concentrated. Fist, fingers up, or fingers down - it makes a difference, and she figured it out, made herself put her fingers in the correct direction. The motor planning and visualization involved in this class is *huge*. The concept that Dr. Gutstein sums up as she must "feel herself taking an action" stands out here.

She persevered. For a solid hour. At something brand new to her.

In her group figure skating class, we deliberately put her in a class where she is familiar with all the moves and skills.

This week in karate, every move, every skill, was brand new. She seemed to welcome the uncertainty. She began to make new discoveries.

I know that future classes may feel more difficult and she may resist or protest. But this week, she didn't. And that's a sign of progress.

She worked hard. She liked it. In the car on the way home, she told me she can't wait until next week.

(I'm not sure she'll be allowed to stay. We're there on a trial basis. Her desire and willingness is there. Her body awareness and motor planning and the attention she needs to approach this discpline may not be enough to keep her there.)

Her moves are not correct. She's got a way to go. She doesn't know where her body is in space. Her sense of proprioception is still weak. So is her vestibular system. But, I was able to see in a big way just how far we have come since the regression after her first birthday. I blinked back tears twice and managed to get control of myself and snap some pics and get a little bit of video, evidence of lots of little miracles, along the way. 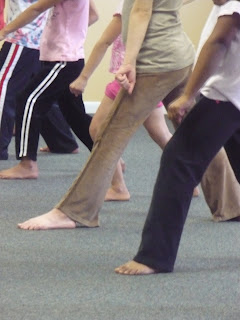 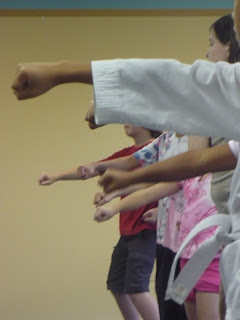 What a exciting moment indeed! Way to go!!! I'm proud of both of you as I know that step came from both of you working hard to get there. This has encouraged me as I try to figure out how to help my kids tackle new environments and tasks.

That is truly remarkable. She really is making strides...it's wonderful that she has a caring Mama there with her every step of the way.

This is absolutely amazing. My neighbor's son (twin that is David's age--one twin HFA, one twin not) has his green belt and he does very well, even with the sparring, except that he profusely apologizes if he kicks someone as part of the sparring.