Today, I had an opportunity to watch two teachers scaffold a learning experience for students.

My daughter and her school band participated in a festival today. (The band earned top rating, a 1, overall, with 1's from each judge in the performance category, and a 2 in sight reading.) 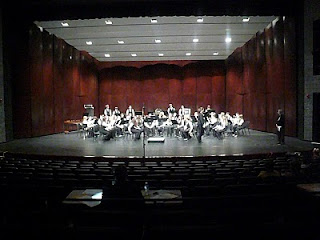 Following the performance of three prepared pieces, we parents were invited to follow our kids to another room to watch the sight reading portion of the festival. We observed as our students were given two pieces of music they'd not seen before. The band director was given seven minutes to preview the music with her students.

I watched in awe as she scaffolded the process. I'm confident she practiced this with her students many times prior to today. She led them through a speedly appraisal of the sheet music. She asked them to open the first piece and quickly called out the time signature, and she asked if the time changed anywhere in the piece. She and the kids were flipping through the music, looking at the time signature. The director asked aloud, talking to both herself and the students, if there were any key changes. She pointed out dymanics, spotlighted where to play more loudly so they would have room to soften as the dynamic changed. Repeats. First ending, second ending. And then she had them count the entire piece, one, two, one, two, aloud, while fingering the notes on their instruments. Finally, she led them through the piece with their instruments for the adjudicator and a rating.

She used exactly the same process with the second number.

When the band members had finished the second number, the adjudicator stepped upon the podium in front of the band. He asked them how to play softly; do you use more air or less air to play softly? The answer is more air. The kids knew that. He took them to a section in the second piece and had them begin it loudly. And he had them play more softly. He spotlighted the dynamics in this particular section, and he was a master with them, guiding them to play this section with more emotion. He led them through a few difficult measures in such a way that the beauty of the music, complimented by the dynamics he had spotlighed for them in a new way, brought tears to my eyes. I looked around and I saw that the music affected other bystanders the same way.

Being a good guide is as much or more about teaching the thinking process as it is about the doing.