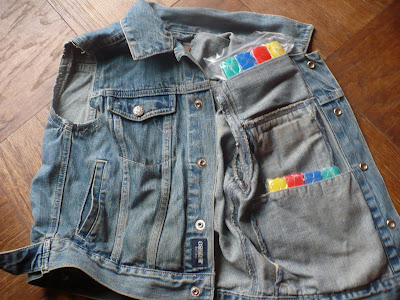 Early Intervention staff introduced us to weighted vests eight or nine years ago as one strategy to use in providing sensory input to the nervous system of a child who needs more input.

Weighted vests ordered from a catalog are expensive. They can be ugly to look at, too. A homemade one, notsomuch.

A boy's denim jacket usually has a lower inside pocket, so we did not need to add one there. My neighbor added upper pockets, all the way across the shoulders and upper back area. She used fabric from the sleeves that we removed. 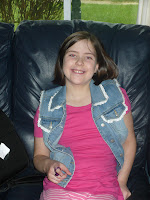 I loaded the pockets with strips of modeling clay from the dollar store. The modeling clay can be pressed so that it molds against the shoulders of the child, and an OT can guide you on how much weight to add.

Weighted vests that were used at school make children stand out and look different. They came from a company that makes items for speech and occupational therapists, and, quite frankly, looked "special needs". A weighted vest made from a denim jacket or vest doesn't make the stand out. It looks like clothing (because it IS clothing).

PS: Mom Lori Swan sent me a wonderful suggestion to add to my post. "If you go to Michael's or JoAnn's stores they sell these plastic beads in the doll making supplies. The bags say how much they weigh so you know that. Whatever you make with them can be washed in the washing machine but not dried iin the dryer. I just lay the items on the dryer and they dry fast. I have made a lot of items using them for my son and they work great. We made weighted bean bags to cover him up with and to toss around . He likes them and I can wash them when they get dirty." and Mom Carolyn Gammicchia added, "We made our son's out of a child's fishing vest from Gander Mountain, filled athletic socks with sand, and placed those in the pockets. When the vest needed washing, we removed the socks. I placed fasteners on the inside so they could not be easily opened. But we did leave a couple for him to use. Then we decorated it with Disney stuff and some other cool patches and the kids at school were actually jealous. It was pretty cool." Carolyn continues, "I though would urge folks before using something like a weighted vest or other things like brushing techniques, etc. to consult with an OT that has a background in Sensory Dysfunction. I'm also not a doctor nor expert, but have seen where folks have utilized some sensory integration tools that actually were not specific to their child's needs and actually caused some problems. Also if you are going to go this route and work on sensory dysfuntion, which I'd urge folks to do within your integrative efforts, to get the book "Building Bridges Through Sensory Integration" by Ellen Yack. This book has some directions to make many items yourself also. This book, along with the "Out Sync Child" assisted us a great deal in this area."
Posted by Penny at 4:16 PM

Those are very cute! I love the ideas!!

A weighted vest made my son worse, but a deep-pressure vest really helped. If only we could find directions to make one of those at home, and make it look like normal casual kids' clothing.

We left a rehab hospital wearing theratogs with instructions to go buy a tight-fittng wet suit. It worked great and fit under clothing. Bathroom trips took a little longer, but so does taking off a traditional pressure suit.

I wonder if compression athletic wear would help for people who want pressure garments. Compression shorts and leggings seem to be common and I've noticed that they are regularly offered on sale in combination with sitewide specials on Penneys' site. I've only looked at adult sizes and don't know anything about upper body garments or than athletic bras. Maybe a snug swimsuit or rashguard could be used if it's not restrictive of breathing or blood flow. I personally really like the feeling of compression shorts when exercising but not for sedentary activities.

Try under armor shirts or the spandex shirts they wear under football gear from sporting goods store.