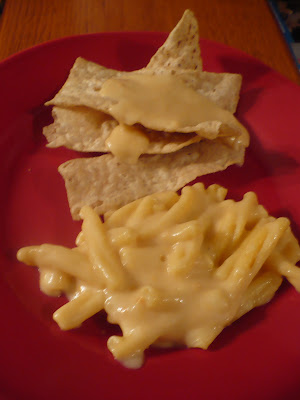 With the encouragement of GFCF Chef Tom Dickinson in a thread on facebook, I attempted a homemade "cheese" sauce. Chef suggested I start with a GFCFSF roux, something I'd never attempted (although I've made a roux with wheat flour and cow's milk a few times). Chef Tom's motto is, "It's not about sacrificing, it's just about replacing." Chef Tom actually suggested a roux of rice milk and arrowroot; I used coconut milk and a GF flour mixture and stuck with a familiar recipe I'd used before I had a child on a GFCFSF diet.

I began by adding Farmo brand pasta made from corn and rice to boiling water.

I began the sauce with a basic roux, that calls for 2 cups of milk (I used boxed coconut milk from So Delicious); 1/4 cup of flour (I used Cybele Pascal's basic blend, except that I use corn in place of potato); and a half stick of butter* (see note below). Melt the butter over medium heat; add the flour and cook, stirring, until the mixture bubbles up well. Do not allow the roux to brown. Add the milk all at one time; cook and whisk until the mixture is smooth.

I added some pink himalayan sea salt from a grinder and a half-teaspoon of dry mustard and whisked that in.

Li'l Bit asks for mac-and-cheese, but won't eat it when I make it. I thought it was because other sauces I've tried are too spicy; this one is not spicy, and still she wasn't feelin' it. *sigh* I think it's a texture issue. She did try it.

She asked for chips to dip into the sauce. That's some creative problem solving! *smile*

From someone who knows how mac-and-cheese is supposed to taste, this attempt is a step in the right direction. This one is a bit bland, and next time, I will add more mustard and more salt, and possibly some Daiya mozarella flavor "cheese". I wonder what other spices I might add that would add flavor without "ick". And I might mix the pasta with the sauce in a casserole dish and crunch up some rice cereal or GF corn flakes on top and bake it for a few minutes. Some chicken or ham or turkey bacon would be good in it. Hmmm. Look at me, creating my own recipe!

The sauce would be good on steamed broccoli or cauliflower. Or maybe asparagus.

My verdict: a little bland; still, it is an excellent first try, and I am encouraged.

*Confession: I use real butter. I know that most GFCFers do not use real butter. However, when my daughter had been on the diet approximately six months, our holistic MD (who was training in the DAN! protocol at the time) told me to try real butter instead of the substitutes we were trying. He'd attended a medical conference on the topic of fats in the diet, and thought butter would be good for her diet, as opposed to substitutes. I resisted. I'd seen my girl regress for four. long. days. after eating ONE teeny cheerio, not once, but twice, in the past six months, and I wanted no part of a deliberate infraction. Dr. N. said that there isn't enough casein in butter to affect some children; that only the most sensitive individuals would react to the miniscule amount of casein that might be in butter. I thought he was crazy. A month or so later, over a holiday break with my parents here helping, I decided to give butter a try. We saw no infraction reaction/regression, and while I do not serve her food made with butter all of the time, I do use it. It is the only milk product I use in her food and I buy organic.
Posted by Penny at 6:29 PM

I've heard great things about using nutritional yeast in non-dairy cheese sauces. Now that my ds has outgrown his milk allergy, I usually let them eat the real stuff and I do without. I'm hoping to try it, though, especially since I can get the Daiya cheese.

i have to tell you that i love the gfcfsf mac and cheeze from gf meals. they have a gfcf one..and a gfcfsf. i have a recipe in some book i just looked at that does use nutritional yeast, cashews and ?? stuff for cheeze.