My newest niece was born this morning. She is named after me. ;)

Saturday was test day at Learn-to-Skate; Eldest passed Basic 3; Li'l Bit didn't. I figured Li'l Bit wouldn't care that she didn't pass; I was wrong. She cried in the car. We were able to show her the two skills she needs to work on and pass in order to move to Basic4, and she seemed to process that information, although she was still upset about it. Her upset over perceived failure is interesting to observe; I see how much progress she is making and where she still needs experience.

Fast forward to today. The girls wanted to skate today, their first official day of CHRISTmas vacation, so I took them to a different arena from the place where they Learn-to-Skate. 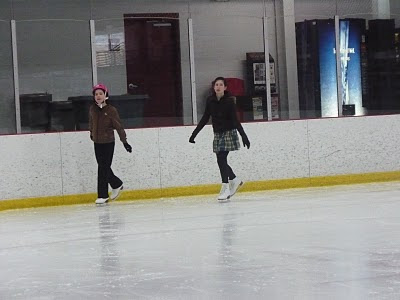 As she got onto the ice today, I asked Li'l Bit what two skills she needs to work on so that she can pass Basic 3, and she actually spent some time and effort on skills. I've never seen her do that. She usually does her own thing during free skate times, and refuses to work on anything she learned in lessons. I was impressed with her focus. (I realized later that she was not working on the right skills, so I have to spotlight those for her, again, but the fact that she spent time and energy on skills today still astounds me.)

There were approximately 10 people on the ice today, and two of the individuals there were brothers, younger than my girls, who were practicing hockey skills. The arena does not usually allow hockey sticks and pucks on the ice. I was worried they'd be wild and all over the place, in the way, discourteous. I had nothing to worry about. These young men took care to stay on the side or at one end and out of traffic as they tossed a puck between them.

Sidebar: Li'l Bit sometimes tries to engage kids on the ice. At Learn-to-Skate, the kids play tag during free time, and she has tried to start a game of tag in this setting, too, with kids who are strangers to us, and they sometimes make fun of her, talk about her, pick on her. I hate that. Eldest hates that, too. Helping Li'l Bit understand what is appropriate and what is not is really challenging when they're skating and I'm watching from the sidelines. (I don't skate.)

Today, one of those boys dropped his hockey stick and she was close to it and picked it up and gave it to him. Then she tried to engage them a little. I told her to give them room, that they need room to practice hockey, instead of telling her to stay away from them.

A few minutes later, the puck sailed to her, and she scooped it up and returned it to them, even when one of them said, "it's okay, I've got it".

I kept waiting for one of them to say something mean to her.

They were so kind. They even waved to her when she skated past them.

I walked around the arena to tell their dad "thank you" for his generous, gracious boys.

I'm thankful for my new niece; for witnessing my girl working on skating skills; for kind strangers on the ice with my girls.

Wow, those hockey boys are awesome!!!!

Recognizing failure is an important developmental step. When Pamela has a bad day in math (not often), she says, "Military school" because Bart Simpson got sent off to military school when he messed up in public school. I wonder what she thinks about her brother going to a military college. LOL!!!! Of course, he really was bad at math! :-)

Very happy to hear the exchange on the ice went so well :o)